Kissed by an Angel – Our Labor of Love

Posted on December 21, 2015 by lynnkelleyauthor

I’m doing a happy dance over the moon because our anthology of short stories, Kissed by an Angel is here at last! This is a dream come true for a very worthy cause. 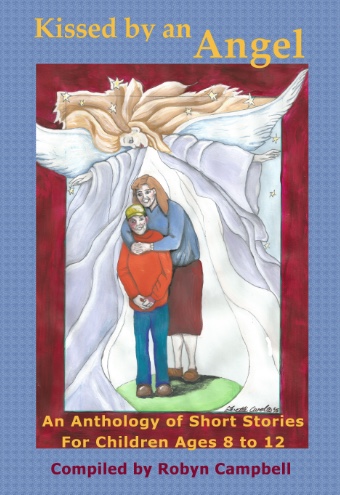 All proceeds will benefit the Sturge-Weber Foundation. Sturge-Weber Syndrome is a rare genetic condition that can cause seizures, blood clots, stroke, glaucoma, blindness, paralysis, and more.

“The Kissed by an Angel anthology includes 10 stories and one poem featuring children who are gifted or have special powers. Some are ordinary people, others are extraordinary, and several aren’t what they seem to be. Read on and be enchanted. 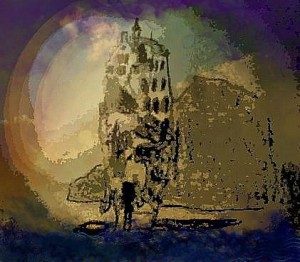 “Wander with us onto a magical island ship, uncover an amazing secret, and solve a very fishy mystery. Discover a World War II codebreaker, captivating garden, time machine, undercover agents, bug master, plus more. And meet a special boy who was kissed by an angel. 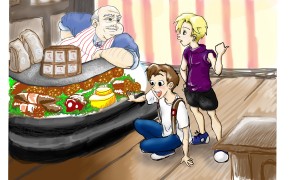 “This anthology benefits the Sturge-Weber Foundation. Children who have Sturge-Weber are born with a port wine birthmark, which varies in color and size, and stays with them their whole lives. “You were kissed by an angel” is how author Robyn Campbell explained to her son Christopher, who suffers from Sturge-Weber syndrome, about his tell-tale birthmark. He is the creative genius who helped choose some of the names of the characters, and he is our inspiration.”

In the words of one of our authors, 13-year-old Erik Weibel (This Kid Reviews Books blog):

“This anthology is dedicated to my buddy, Christopher Campbell, every other person who has been kissed by an angel, and the people who work to find treatments to help those with Sturge-Weber Syndrome.

“These stories are dedicated to every kid with different abilities and the people who advocate for them. I want to grow up in a world of inclusion, opportunity, and equality for everyone.”

Our anthology begins with this beautiful poem: 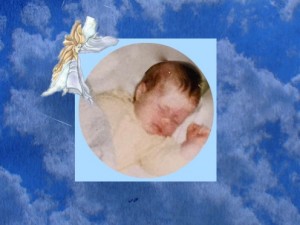 “When my son Christopher came into the world, he looked different. A dark red birthmark covered most of his body.  The doctor thought the birthmark would go away in a few days. That was not to be. It was a port wine birthmark and was a sign of a devastating genetic condition—Sturge-Weber Syndrome.

When he was two weeks old, he turned blue and was unresponsive. We called the pediatrician and rushed him to the hospital. The doctor met us there and explained about Christopher’s seizure. He said he’d only seen one case of this disorder. And that was in medical school forty years previous.

The next day I went to the library, and I found a medical book that had one definition for Sturge-Weber. The brain will waste away. Armed with this knowledge, I made life great for Christopher while his father and I waited for his brain to dissolve. It was then that a neurologist told us that Christopher would die before he was two years old. Not great news for a momma and daddy to hear. 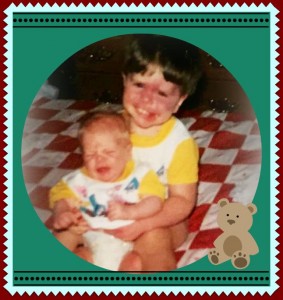 Fast forward to thousands of seizures later, an excellent pediatric neurologist, Dr. D’Cruz, family love, and much prayer, Christopher is still with us. His brain is still intact.

Sure, the seizures hurt him in more ways than one, but he loves life, and he loves the authors of this anthology. He can talk, think, count money, and he does a lot of chores around the farm. Christopher graduated from high school and works for his dad and me. He can take care of himself (for the most part).” 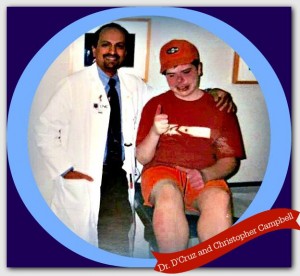 Robyn’s foreword is compelling and so is her anthology story, which is told from Christopher’s point of view. Writing it was extremely difficult for this mother of seven. All the emotions of the close calls they’ve lived through came flooding back, but the story is beautiful. It’s about a very special and brave little boy.

As you can imagine, it hasn’t been an easy road for the Campbell family or other Sturge-Weber families.

A few months ago Christopher was diagnosed with a brain aneurysm after going through a battery of tests. Imagine the despair this family suffered, only to find out it was a mistake. Sheesh! This will be an extra-special Christmas, knowing he’s not dealing with such a life-threatening condition.

While the port wine birthmark is a common sign of people with Sturge-Weber Syndrome, Christopher’s is unusual in that it covers about 90% of his body. It gets thick and becomes brittle and painful, so he has to have laser treatments on the birthmark every two to three months. The procedure itself is painful, but it’s necessary.

What a trooper he is. I’m amazed that he endures so much and still remains such a gentle, loving soul.

The gene that causes Sturge-Weber was discovered in 2013. It’s GNAQ. We’re all hoping this discovery will lead to a cure.

If you’d like to help raise money for the Sturge-Weber Foundation, plus be entertained by some wonderful short stories:

You can purchase Kissed by an Angel
on Amazon.

Available in both print and digital formats.

The Campbell family and the other Sturge-Weber families thank you for purchasing this anthology and supporting them.

“Face” – A beautiful piece by Bianca Wood. This is her first single.

Robyn says, “Bianca is from South Africa and has Sturge-Weber Syndrome. Clearly, she doesn’t have a lot of the problems that most have. But that’s why she did this song. To speak for the ones who can’t talk for themselves. To teach people that this is diverse too. Don’t stare. It hurts.”

Kissed by an Angel – Contributing Authors:

Special thanks to Mikey Brooks for taking over the formatting when I got stuck and couldn’t go any further. He’s also a professional illustrator and children’s author. You can find him at http://www.insidemikeysworld.com.

Also, thank you, Kathy Halsey, for blogging about our book, Thanksgiving?Writers Giving! You Giving? and for your patience and support while hanging out in our FaceBook group. We had to wing it (pun intended), but our lovely angels guided us through the process, slowly but surely.

It’s great to finally hold this baby in my hands!

Did this year go by as fast for you as it did for me? What are your plans for the holidays? We haven’t put up any decorations yet. Do you think the grandkids will believe me if I tell them reindeers stole our Christmas tree? Ha-ha!

Merry Merry to you and your family!

19 Responses to Kissed by an Angel – Our Labor of Love