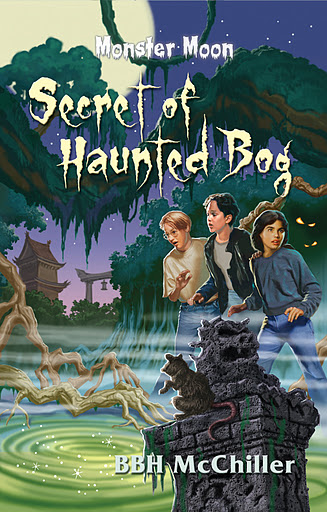 “Beware the bog, landlubbers.
If ye venture into that haunted place,
Yer every step be filled with danger. Yarr!” ~Vlad

In a twist of events, AJ and Freddy end up lost in a dark and marshy bog, where they are surrounded by thick fog, creepy sounds, bizarre creatures, and ghostly apparitions.
In the depths of the creepy bog, they stumble upon a missing girl and horrifying evidence of toxic pollution. But somebody doesn t want them to escape. Who? Why?

Hardback:  (First edition) Available at a discounted price (especially for bulk orders): Email me at contact@lynnkelleyauthor.com

ZomBuddies AJ, Emily and Freddy are back for more adventures. When Aunt Zsofia takes them on a trip to Chinatown on the edge of a saltwater bog they never suspected they’d end up facing down monsters, ghosts and gun-wielding bad guys. The bog holds many secrets, the most interesting of which is a young girl named Mei who claims to be hiding from the people who killed her parents. In their quest to help Mei the ZomBuddies will have to face down toxic bog water, mutated monsters and treacherous adults.

Secret of Haunted Bog is a fast-paced, fun tale. Similar in feel to the Nancy Drew, Hardy Boys or Bobsey Twins, or even the more modern incarnation of Scooby Doo, it pits three courageous, stubborn kids against mysteries, supernatural and not. Engaging and exciting, Monster Moon makes for great in class or before bed reading. Definitely recommended for preteen collections.
Contains: Some gross out moments.         ~Michele Lee ~Booklove~ (Louisville, KY)