Posted on April 29, 2015 by lynnkelleyauthor

Welcome to Health and Wellness Wednesday. Perhaps you’ve heard the saying, “Laughter is the best medicine,” but do you know how important laughter actually is to your well-being?

My fourth Toastmasters speech is about laughter. Here’s the video, but for those of you who don’t have time to view it or can’t access it, the speech is typed out below.

You buy a week’s worth of groceries, load them in the trunk, hop into the passenger seat, and wait for your husband to get in and drive, only to realize you’re by yourself.

You’re working at your desk. The phone rings and you press it to your ear, but there’s no sound because you grabbed the stapler.

You pay to fill up your tank at the gas station, get a few miles down the freeway and notice you’re almost on empty. Ding-dong! You forgot to pump the gas after you paid for it.

It’s good to poke fun at ourselves.

We all need a little giggle get-away, and everyday life is full of hilarious stuff.

My friend, Jennette Marie Powell, told me a lot of the guests at her wedding had a hard time not busting up when she and her husband knelt at the altar. It turned out the groomsmen had put tape on the bottoms of her husband’s shoes with HELP ME written on the tape!

Another friend, Jolene Navarro, shared some real-life stories: “My family has a dark sense of humor,” she said. “My father was only 49 when he was killed in a plane crash. Heavy sadness, lots of tears and grief, but also lots of laughter for a life lived without regret.”

Jolene’s mother was talking to the funeral director and couldn’t stop laughing when he offered her the more expensive urns. “Roger would die if I spent that much on a vase,” she said.

Jolene continued, “Ten years later, we followed our mother’s wishes and had her cremated. At her memorial we got notice that the urn would not be there on time. They asked if we wanted to wait.

“We cracked up. A few hundred people looked at us like we were crazy. My dad had always said Cindy would be late to her own funeral. Well, we went ahead and started without her. 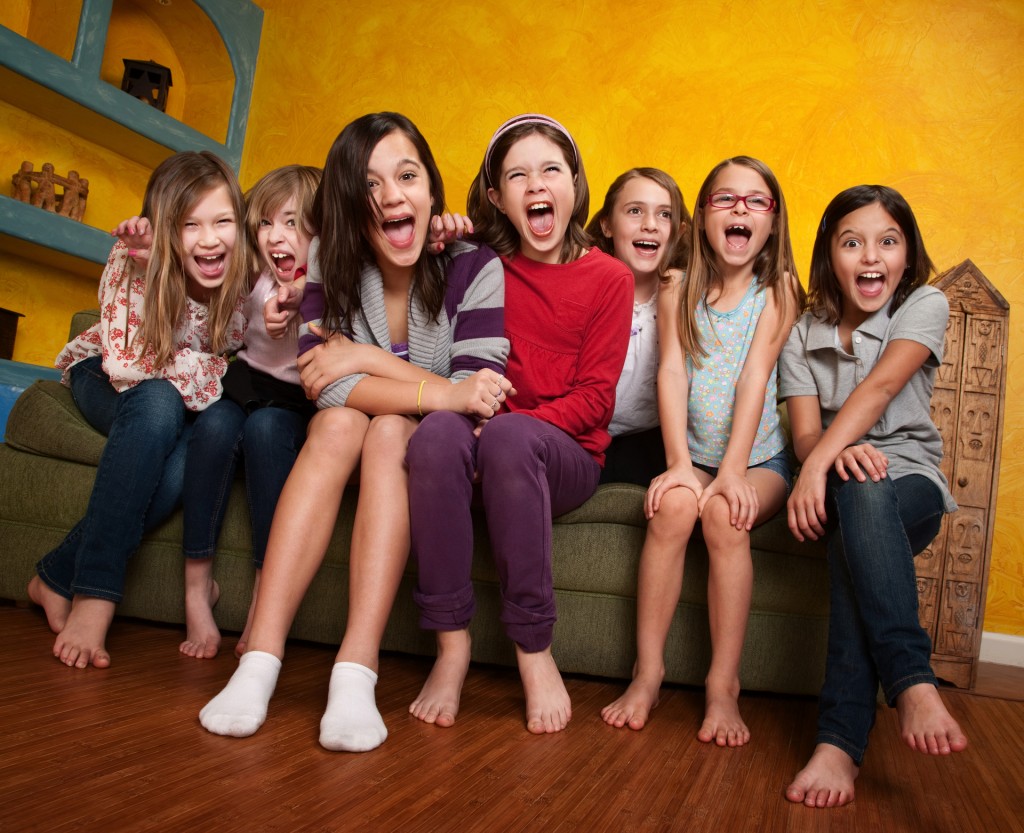 Children laugh an average of 300 times a day, but for adults, it’s only 15 times.

What can we grownups do about that?

My online research yielded some good guidelines. For instance, get a pet.

Join a laughing yoga class. Yes, there really is such a thing!

Writer Winsome Coutts says, “Laughter is a valuable part of your authentic happiness! Laughing each and every day is as good for you physically, emotionally and spiritually as taking your vitamins and getting exercise.”

Here are a few of his suggestions: “Play and be silly with small children.

“Look into laughing therapy. There are schools and therapists out there that will help you ‘learn’ to laugh.

“Play fun games that induce laughing. Games like charades and Pictionary™ are good examples.” (My personal favorite is Balderdash.)

Of course, humor is subjective. What’s funny to me might not be funny to you.

Are there certain things that always make you smile? There are some things that never fail to tickle my funny bone, like silly animal flicks, baby laughter, and when people imitate their pets.

The world is full of comedy. YouTube has tons of humorous clips.

Do any of you remember the episode on The Mary Tyler Moore Show about the funeral of Chuckles the Clown? Before the funeral began, Lou looked around. “I wonder which ones are the other clowns?”

Murray said, “We’ll know soon because they’re all going to jump out of a little hearse.”

Mary scolded them for being disrespectful when a man had just died.

Then the minister talked about the characters created by Chuckles, such as Peter Peanut, Billy Banana, Aunt Yoo-Hoo, and Mr. Fee Fi Fo, who had a little catch phrase whenever he got knocked down and would pick himself up and dust himself off. He’d say, “I hurt my foo-foo.”

Mary got the giggles and couldn’t hold them in. Then she tried to cover up when people looked at her. (Cough, cough – press lips together, gesture.) You have to watch it on YouTube to get the full impact. It’s seriously funny! I had tears streaming down my cheeks.

There’s another video clip that I bust up over. Maybe you’ve heard it? A woman called in to a radio station to complain about the placement of deer crossing signs.

She said, “I mean, why are we encouraging deers to cross at the interstate? I don’t get it. That’s such a high-traffic area.”

The DJ was speechless.

The woman continued: “It’s so irresponsible of us to allow these deer crossings to be in areas where they are likely to be struck by oncoming traffic. You’d think they’d put deer crossings in smaller towns, maybe like at a school crossing. It would be a safer place for them to cross.”

Finally, the DJ responded: “They aren’t telling deer to cross there. It’s just more of an alert for drivers so they know it’s a high deer population.”

DJ: “You seem to be under the misunderstanding that the deer are attracted to the deer crossing sign.”

Woman: “Well, yeah, the deer crossing sign is there to let the deer know that’s where they need to cross.”

DJ: “Right. And all these accidents you had occurred after you saw a deer crossing sign?”

See what I mean?

And then there are the one-liners that always lift our spirits:

If at first you don’t succeed, then skydiving isn’t for you.

(Long pause.) I just got lost in thought. It was unfamiliar territory.

On the other hand, you have different fingers.

Remember what Dr. Seuss said: “From there to here, and here to there, funny things are everywhere.”

I wholeheartedly agree, folks, so be sure that each and every day you Get your giggle on!

That was a fun speech. I hope you enjoyed it.

For more info on the fascinating benefits of laughter, check out this super informative and interesting article on Health and Families. It’s worth taking a few moments to read.

My friend, Steve Attkisson, suggests reading this funny book: Anatomy of an Illness by Norman Cousins.

“The best-selling, groundbreaking classic by Norman Cousins on combating life-threatening illness through humor and patient participation in care.

“Anatomy of an Illness was the first book by a patient that spoke to our current interest in taking charge of our own health. It started the revolution in patients working with their doctors and using humor to boost their bodies’ capacity for healing. When Norman Cousins was diagnosed with a crippling and irreversible disease, he forged an unusual collaboration with his physician, and together they were able to beat the odds. The doctor’s genius was in helping his patient to use his own powers: laughter, courage, and tenacity. The patient’s talent was in mobilizing his body’s own natural resources, proving what an effective healing tool the mind can be. This remarkable story of the triumph of the human spirit is truly inspirational reading.”

Do you think laughter is healthy? Do you have a favorite one-liner you’d like to share? Has laughter helped you deal with difficult times? What are your thoughts? I’d love to hear from you!

If you enjoyed this post, please consider subscribing to my blog. Fill in your email address in the window toward the top of the sidebar.

15 Responses to Laugh and Live Longer