Posted on October 15, 2012 by lynnkelleyauthor

I finally received a photo a couple weeks ago of this freaky fake cat. I’d been bugging my sister Cindy for about three years to take a picture of the scary cat her neighbor Shelly uses for a Halloween prop, the creature Shelly had tried to prank Cindy with back then, hoping to scare her good, but being a prankster herself, Cindy didn’t fall for it.

Cindy borrowed it, though, to pull a few pranks of her own. Here it is, the freaky-looking cat. I have to admit, it IS pretty creepy, especially finding it in a refrigerator. Eek! Lost my appetite! Did you? 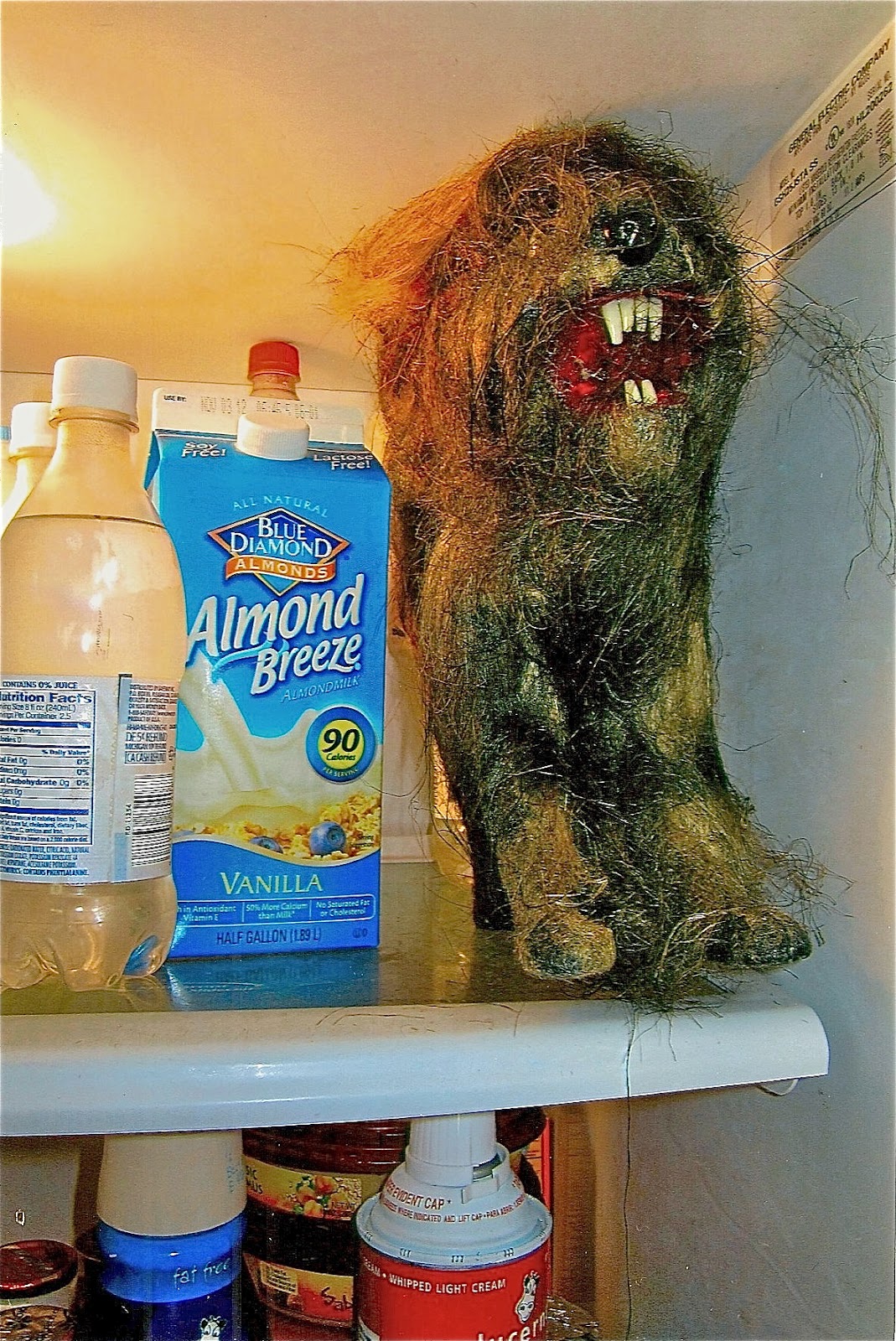 Cindy put the cat in her daughter’s room. Ballerina, then age 13, wasn’t startled at all, but it was still daylight at the time.

So Cindy set the cat on her son Joker’s window sill. By the time the high school jock jetted up the stairs to his room, it was dusk. Next thing, Cindy heard a loud, “Augh!”

Cindy giggled, and after the initial shock, Joker being a joker, he chuckled that Mom got him good.

That was fun, but Cindy wasn’t through with that spooky cat. This time she put it in the master bedroom on her window sill. With that, she was off to Ballerina’s dance lesson and forgot all about the freaky cat in her window.

Returning home a couple hours later, she found her husband, Jim, in the rocker-recliner in the family room. Clearly, he was upset about something. “What’s wrong?”

“Cindy, sit down.” He was dead serious. She braced herself for whatever bad news Jim was about to tell her. She noticed a baseball bat in the middle of the room and wondered why it was there.

“What is it? What happened?” she asked.

“Don’t ever do that again.”

“Do what? What did I do?” She didn’t know what he was talking about. She’d forgotten all about the cat.

Jim explained his eventful night after arriving home from a long day at the office. He entered the bedroom to change and noticed something on the window sill that gave him quite a start.

He focused on it and thought it was an owl that somehow got in through the window screen. Its eyes looked eerie and it didn’t move. Jim wanted a closer look, but the light switch was near the creature, so he couldn’t risk turning it on and having the thing fly off throughout the house.  He pondered how to catch it.

A baseball bat might do the trick. After retrieving one, he got on hands and knees and slowly approached the owl, baseball bat at the ready to nail it. Creeping slowly on all fours, he made a ‘Ch-ch’ sound from the side of his mouth, hoping to frighten it enough so it would escape back out through the screen, but it still didn’t move.

‘Ch-ch, ch-ch.’ Jim cautiously approached, staying low. ‘Ch-ch.’ Upon closer look, he noticed it wasn’t an owl at all, but a cat. A stiff cat that never moved. Was it dead?

Puzzled over how a cat got onto the window sill and died in a such a petrified state, Jim finally managed to flick the light on, then realized he’d been pranked.

Furious, he called Joker and chewed him out. Joker laughed and said, “It wasn’t me, it was Mom.”

“Your mother wouldn’t do that to me,” Jim said.

Joker laughed harder. “I swear it wasn’t me, it was Mom. She put it in my room first.”

Jim stewed in the rocker-recliner until Cindy and Ballerina returned home to find him there and the baseball bat on the floor.

Cindy apologized just for the sake of it but had a good laugh later that her prank was such a huge success!

Jim never laughed, not once. Not amused in the least.

Two years later, Shelly pranked Cindy again, leaving the cat in Jim and Cindy’s refrigerator while Cindy was gone. She got a big kick out of it, but when Jim saw the cat, he told Cindy to get that thing out of there and wanted nothing to do with it.

Have you ever been the victim of a prank like this? Are you a prankster?  Would you be mad, too, if this happened to you?

Do you have a parenting or grandparenting memory
or another story you’d like to share?
If you’re not a parent, memories from your own childhood count, too.
Warning: I might feature your story in a future post.
(Names can be changed to protect the guilty!)
I’d like to thank all those who have shared their stories.
These posts wouldn’t be the same without your input.
If you don’t want to leave a comment but would rather contact me by email,
you can reach me at: lynkelwoohoo at yahoo dot com.