Posted on July 6, 2012 by lynnkelleyauthor
It’s Friday and I’m feeling quirky, so here’s a Paul Simon song with some quirky lyrics. This is the Chevy Chase version, so I hope it puts a smile on your face and a hop and a skip in your step.
A nice kickoff for the weekend, don’t you think?
Paul Simon – You Can Call Me Al
Chevy Chase version!
The song lyrics are pretty random, especially the “Bonedigger Bonedigger” part.
Skeletons might get a bit rattled. 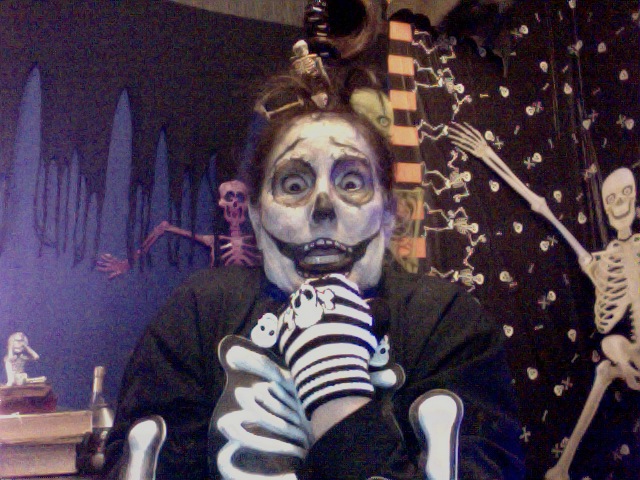 “I don’t dig bonediggers even if it is in a cartoon graveyard,
and please get those mutts away from me!”
By the way, who’s Mr. Beerbelly?

Do you understand the lyrics?

A man walks down the street

He says why am I soft in the middle now
Why am I soft in the middle
The rest of my life is so hard
I need a photo-opportunity
I want a shot at redemption
Don’t want to end up a cartoon
In a cartoon graveyard
Bonedigger Bonedigger
Dogs in the moonlight
Far away my well-lit door
Mr. Beerbelly Beerbelly
Get these mutts away from me
You know I don’t find this stuff amusing anymore
If you’ll be my bodyguard
I can be your long lost pal
I can call you Betty
And Betty when you call me
You can call me Al

A man walks down the street
He says, why am I short of attention?
Got a short little span of attention
And why are my nights are so long?
Where’s my wife and family?
What if I die here?
Who’ll be my role-model?
Now that my role-model is
Gone…Gone
He ducked back down the alley
With some roly-poly little bat-faced girl
All along…along
There were incidents and accidents
There were hints and allegations

A man walks down the street
It’s a street in a strange world
Maybe it’s the Third World
Maybe it’s his first time around
He doesn’t speak the language
He holds no currency
He is a foreign man
He is surrounded by the sound
The sound
Cattle in the marketplace
Scatterlings and orphanages
He looks around, around
He sees angels in the architecture
Spinning in infinity
He says Amen! and Hallelujah!

According to Wikipedia, “The names in the song came from an incident at a party that Simon went to with his then-wife Peggy Harper. French composer and conductor Pierre Boulez, who was attending the same party, mistakenly referred to Paul as “Al” and to Peggy as “Betty”, inspiring Simon to write a song.“It also states that the lyrics can be interpreted as a man experiencing a midlife crisis.
Are you a Paul Simon fan? Do you think these lyrics are a wee bit random? I mean, c’mon now, “Scatterlings and orphanages” and “He sees angels in the architecture” and “Spinning in infinity”?
I have to admit I can relate to “Spinning in infinity.” Yep, totally digging that line! And since I’m such a random being and love random acts of weirdness, I LOVE this song.
Have a wonderful weekend. By the way, you can call me Betty, if I can call you Al! I’m off to find a bodyguard…

Like Loading...
This entry was posted in Uncategorized and tagged Funny Bones, Mr. Beerbelly, Paul Simon, Pierre Boulez, quirky, You Can Call Me Al. Bookmark the permalink.