Posted on July 2, 2012 by lynnkelleyauthor

Mary Alice Parker writes family stories down to preserve them for future generations to enjoy. These stories took place in the 1940s but are incidents parents today can relate to: 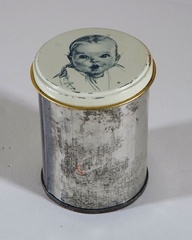 “My cousin Dottie Chinnici’s youngest son, Gerry, was a very active child who walked early. He had more locomotion than common sense. It was summer and still light when they put their 10-month-old baby into his crib, kissed him goodnight and closed the door.

“About a half an hour later, a neighbor rang the front doorbell. ‘Does this child belong to you?’ Gerry had managed to unlatch the window screen and open it, climb out of his crib and over the window sill, lower himself to the ground, and was apprehended walking down the sidewalk in his yellow sleeper with feet. Needless to say, the windows in his room got nailed shut, and they figured out another plan of rescue in case of fire.

“This same kid, Gerry, was quite a climber. He was a little older but still astonishing his parents with his athletic feats. Some were not appreciated. This was World War II and sugar (as well as meat and gas, etc.) was rationed and highly prized. Sugar meant cookies and birthday cakes and canning apricots and peaches and some in the coffee and tea.

“The sugar was put on top of the refrigerator for safekeeping. Somehow little Gerry climbed on top of the fridge with the sugar, tore open the bag, spread it all over his face and clothes while sampling it, and sprinkled the rest like snow all over the counters and floor.
“He survived all this mischief (he was a very cute boy), and when he was about four, he went with his mother Dottie to visit great-uncle Clark Woodruff who lived on a small orange grove ranch on Bandini Street in Riverside, California. Uncle Clark was a very old, tall, thin and pale gentleman with white hair.
“Gerry kept looking up at him all the time his mother and great-uncle were visiting. At a lull in the conversation, Gerry said, ‘Are you one of my ancestors?’
“Uncle Clark looked a little startled and then said, ‘Yes, Sonny, I guess I am.'”I bet Mary Alice’s relatives are tickled that she preserved these stories. I don’t know about you, but I sure got a good chuckle out of them.
Looks like kids making messes is something every generation deals with!
Kids Destroy Home With One Bag of Flour
YouTube November 2011
Do you have a parenting or grandparenting memory
or another story you’d like to share?

Warning: I might feature your story in a future post.
(Names can be changed to protect the guilty!)
I’d like to thank all those who have shared their stories.
These posts wouldn’t be the same without your input.
If you don’t want to leave a comment but would rather contact me by email,
here’s my address: lynkelwoohoo at yahoo dot com.
A version of this story originally appeared in The Highland Community News in November 1999.