Dad Could Have Been a Writer

Posted on February 6, 2012 by lynnkelleyauthor

When I was a kid, my dad made up silly poems that I thought were funny as heck. Like this one:

You may find fuzz in a pocket.

You may find a runner in hose.

But the funniest things I find

are those little things in my nose.

I think I was Dad’s biggest fan. 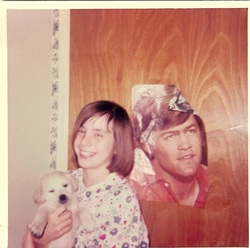 Dad turns 79 this week. He’s hard to buy for, so I thought it would be nice to share this nonfiction piece he wrote almost six decades ago, which I knew nothing about until recently. It was published in the school newspaper (or journal?) when he attended Duquesne University in Pittsburgh for a couple years. How cool to learn that Dad had been published!

I’d say he has a gift for writing. Were those genes passed on to me? I think he could have been a writer if he’d pursued it. Of course, I’m partial! Without further adieu, here it is, from the archives of Dad’s life:

Frequently my father asks me to take him to various parts of the city. He owns a small book store in East Liberty, and he buys much of his stock from private homes. There is a wide variety in the types of homes we enter. The worst I have ever seen was on the North Side. The house was one in a row of five. The steps were sagging, as was the porch, and everything needed paint.

The front door was open so we walked in. Evidently the house was sub-divided into apartments, because in the hallway a door on the left bore the name Jones scribbled on a little card tacked to it. I glanced around the hallway while my father knocked on the door. The hall was quite long and high but very narrow. On the right wall hung several old tintype pictures, while on the left wall, in loose folds, hung the wallpaper. The one thing the walls, ceiling and floor had in common was a covering of dirt.

At that moment the door was opened, and the woman we came to see peered out. My father introduced us. The woman was in her late fifties, gray-haired and enormously fat. Her cheeks were pouchy, and saliva trickled from the side of her mouth even when it was closed. She wore ancient high-topped shoes, split at the sides, and a filthy, baggy print dress that was partially covered by a filthier apron.

Her front room was filled to capacity with junk. While my father was sorting out books, I looked around. The walls were covered with religious pictures, and there were wooden statues of Indians all around the room.

My father finished the books and asked the woman if she had any jewelry for sale. She told him she had some stickpins in the kitchen. We started to walk through her bedroom when my father noticed another bookcase. While he was looking through this, I surveyed the bedroom. Empty, the room would have been large. But there were trunks, mattresses, tables, old clothes, and litter everywhere.

Clotheslines were strung across the room, and hanging from them were old girdles, brassieres, stained sheets, and frazzled throw-rugs. I turned around and found myself looking at a giant cockroach, which was perched on an old trunk and whose feelers were waving furiously, as if daring me to come closer. I didn’t take up his dare.

When my father had gone through the bookcase, we went to the kitchen. As soon as we crossed through the door, a sickening stench met us. I backed up and remained in the doorway. From my vantage point I could look into the kitchen and then, like a swimmer, turn my head and gulp fresh air from the hallway. Like the other rooms, the kitchen was filled with junk. There were four ranges–only one connected–which were piled high with old newspapers and glass jars. The wallpaper was peeling from the walls in great strips.

Finally, my father finished his business and told me to get a box for the books. I saw several boxes in the hallway. I picked one up, shook out two roaches, and piled the books into it. My father paid the woman and we left the house.

When we got to the car, I asked him how he could stand such places. With the typical antiquarian bookman’s attitude, he replied, “I’m looking for books, Gordon, not bugs.”

I think I’m still Dad’s biggest fan! I wonder how different life would have been if my father had become a writer…. 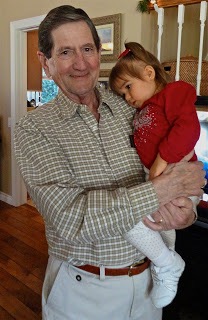 This was taken on Christmas Day. Dad’s holding great-granddaughter Twinkle Eyes. She was born on his birthday.

He’s just now getting a few gray hairs. (How come those genes didn’t get passed on to me?)

Do you have any special interests or talents that you think genetics played a part in? Have you ever been surprised to learn something new and impressive about one of your parents?

22 Responses to Dad Could Have Been a Writer