Mystery of the Strange Ticking Sound

In June I went to Laughlin, Nevada with my mom on the senior citizen bus. The stingy slots forced us back to Room 1632 by 8:30 p.m., where a series of strange events played out. 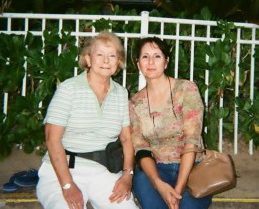 We settled in for a night of TV and some mother-daughter quality time. Soon a ticking sound distracted us. “What in the world are those people doing?” I asked, pointing at the common wall to the room next to us.

Most of the seniors from the bus were on our floor. Was the sound coming from some kind of health gadget? Perhaps a life-saving machine? We turned up the TV and waited for the noise to stop. It didn’t.

Never mind that our bathroom sprung a leak. Actually, it was more like a waterfall pouring from the seam of a rectangular panel in the ceiling.

Never mind that the engineer the hotel sent up to investigate the leak couldn’t hear the ticking sound. As soon as he knocked on the door, it stopped. “It’s probably the wind,” he said.

“No, it’s not the wind,” I told him. “It’s ticking and sounds mechanical.”

Never mind that the leak was fixed (broken overflow valve in the tub of the room above us) and that the second engineer who cleaned up the leak blamed the ticking on the wind, too. “Although sometimes in the summer we get complaints of ticking sounds when it’s raining. But it’s not raining now.”

Never mind that when I asked the engineer what that rectangular-shaped panel in the ceiling was, he informed me it was just the AC unit.

Never mind that I worried about water getting into the electrical AC unit and that a fire might break out or that a bomb might explode and blow us to smithereens.

Never mind that we tried our best to ignore the ticking, even though it got louder and louder and I wanted to scream.

Never mind that Mom called Room 1634 and asked the nice lady to please turn off whatever was ticking in her room.

Never mind that the nice lady said she had nothing ticking and the only sound she heard was from the elevators, which were next to her room.

Never mind that the nice man who answered in Room 1630 said he had no machines running in his room, but he couldn’t sleep either because of the constant tapping on his window.

Never mind that we checked the windows and there was nothing out there. No trees (we were up too high). No birds (no ledge to perch on). No wind. No rain.

Never mind that once we decided there was no way we’d ever get any sleep with that noise, we called for another engineer to come up and put an end to the incessant ticking. Again, the noise stopped as soon as he knocked, and we worried that no one would believe us. Boy, were we relieved when he said it was no problem to move us to another room.

As soon as he was out the door, we scrambled to throw our clothes and toiletries into our suitcases and were ready in five minutes. We sat on our beds listening to the ticking until the bell boy arrived to show us to our new room.

The bell boy wasn’t able to hear the ticking sound either. He told us that there were rumors of hauntings in the hotel.

Hmm, that would certainly explain why the ticking stopped every time someone knocked, plus the hotel was old enough to have a history of ghosts.

Never mind that we pulled our suitcases down the hall at 1:30 a.m. in our pajamas. Mom wanted to change out of her nightgown, but I assured her that it looked like a summer dress, so she put a sweater on to hide the spaghetti straps. I threw a sweatshirt on and figured my capri PJ pants looked like a summer outfit, too.

To make up for all our troubles, they gave us a room with a view of the river.

I can’t say we woke up refreshed. The ticking sound was now a nagging mystery. How could it ever be solved?

I believe I finally found the answer. Tune in to my next post and I’ll share my thoughts.

All in all, it was quite a strange experience, and I felt like Mom and I were players in a sitcom or stooges in a hidden camera show.
.
Do you ever find yourself in real life situations that feel like a scene in a movie, a book, or a play? What was it, and did it spark ideas for your writing?

27 Responses to Mystery of the Strange Ticking Sound