Is Your Character Cliché? 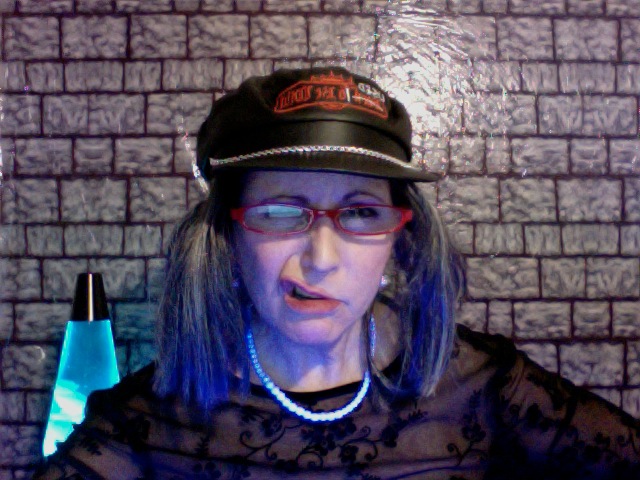 It’s hard to get around making spooky characters dark and creepy. Seems like it’s always been that way. Why? My guess is, because our fears are enhanced at night when it’s harder to see, so our imaginations sometimes play tricks on us. Many people are afraid of the dark, so we associate “dark” with “scary.”

How can you add a twist to a spooky character?
Watch this video clip (less than two minutes) to see how I changed things up for my Goth lady.
The video has other clichés, too. See if you notice any.
How would you answer the question at the end?
I’m not saying that spooky characters shouldn’t wear dark clothes and look freaky. Just trying to think outside the box. Yikes! Another cliché. Sheesh, they’re slithering out of the woodwork.
Here are some twists that came to mind for cliché characters:

Those are just a few. I bet you can think up some good ones.

How about real life examples of twists we weren’t expecting?
In 1974, Tatum O’Neal showed up at the Academy Awards wearing a tuxedo instead of a dress. She was the youngest person ever to have won an Oscar. The category was Best Supporting Actress, and she was ten years old. She played Addie Loggins in Paper Moon.
Today on TV I just happened to catch the end of a news clip about beauty contestants running a race through the streets in their high heels! How crazy is that? The camera zoomed in on a high heel that fell off one of the women’s feet.
Zola Budd made headlines in 1984 when she ran barefoot in the Olympics. She grew up running barefoot in South Africa and preferred to run that way. She didn’t win the Olympics (instead, huge controversy ensued when Zola took the lead and Mary Decker, America’s sweetheart, tripped and fell when they collided), but Zola broke the world record for women’s 5,000 meters twice and also won the women’s World Cross Country Championship twice.
I guess to sum it all up, idiosyncrasies in our characters can add cool twists and dimension, plus enrich our writing.
Do you have fun creating quirky traits or habits in your characters? Care to share them?
P.S. June 8th was my blog’s two-month anniversary. Time flies! (Sorry, just couldn’t resist adding another cliche!)

33 Responses to Is Your Character Cliché?