Posted on February 21, 2018 by lynnkelleyauthor

Have you ever missed a step? On a stairway? 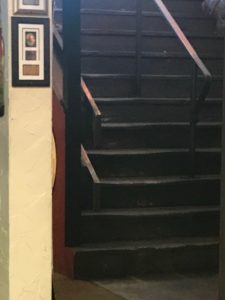 Last September George and I were on a weekend trip with two of our kids. I held onto the handrail while cautiously walking down a stairway that led into a pub. My daughter and son walk faster, so they were way ahead of us and were scouting out a place to sit. George was behind me.

Well, the staircase was wacky, but I didn’t realize it. I missed the bottom step, turned my ankle so the outer part of my foot took the brunt and then landed spread eagle on my bottom after falling in slow motion. Why is it always in slow motion?

George watched me tumble, helpless to do anything. My son turned around and did a double take as if he was thinking, what the heck is she doing on the floor? He came back and offered a hand to help me up. So did George. 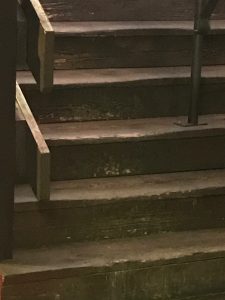 I was dazed, wondering how in the world I missed that last step, especially since I’d held onto the rail. The table we sat at faced the tiled stairway, so while my daughter and son placed our orders, I studied that stairway and realized the handrail ended at the third step from the bottom. I took a picture, then walked over to get a closer look.

Standing on the third step from the bottom, I recorded a video while walking down the stairs.

I wondered if the designer of the handrail had one too many drinks while working on that project because clearly that rail is too short for that stairway. Plus, there was no white line across the edge of the bottom step to give patrons a heads up that it was there. To top it off, the lighting was dim, so that made it hard to see the floor.

These falls can happen anywhere and of course when we least expect it, but that staircase is a lawsuit waiting to happen.

The pub can thank their lucky stars I’m double jointed and that I didn’t get injured. However, double jointed or not, if I had fallen on my head, it wouldn’t have mattered how limber I am.

During the phone call, I reminded the employee I spoke to (the owner wasn’t available), “Hey, this is California. People are sue happy.” So, they’ve been warned. Next time we go to that resort town and visit that bar, if they haven’t fixed their staircase, I might have to name the place on my YouTube video and here on my blog.  Someone could get hurt pretty bad on a stairway like that. 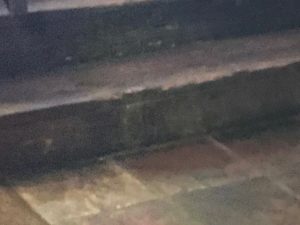 One of her injuries was a fall in a restaurant. Her ski boots were slippery as ice on the tile floor, so she didn’t just fall once, but twice! The owner of the restaurant told her he’s been meaning to post a sign warning patrons they should not wear ski boots inside.

That would be wise, Mr. Manager. Sheesh!

We need to do our best to be mindful of our surroundings and watch our step, especially if we’re distracted or in a hurry.

One time I was rushing at my sister’s house and forgot there was a step in her entryway. It blended in with the floor. Being double jointed didn’t help me with that fall because my knees took the brunt of the fall. Swelled up pretty bad and was badly bruised, but no lasting damage. Whew! My poor sense of equilibrioception was partly to blame for that fall.

Wishing you sure-footed adventures when you’re out and about and when you’re at home, too. That’s when we’re more likely to let our guard down.

What are your thoughts? Have you or a loved one had a bad fall? Do you hold onto handrails? Do you make it a point to be mindful? Do you have any other suggestions to improve that stairway?

If you’d like to receive future posts, fill in your email address in the “Subscribe” window in the sidebar. Thanks for visiting!