Posted on October 30, 2017 by lynnkelleyauthor

Dodger fans are all pumped up. 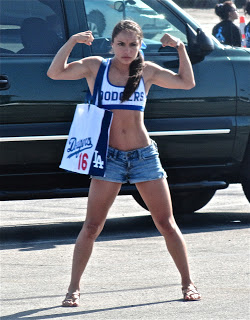 My middle daughter married into a family of big time Dodger fans. This is her sister-in-law.

Have you been watching the World Series games, Dodgers vs. Astros? What an exciting series.

It would be cool to brag that we were lucky Dodger dogs and got to go to a World Series game, but that’s not the case. George and I are cheering them on from home. 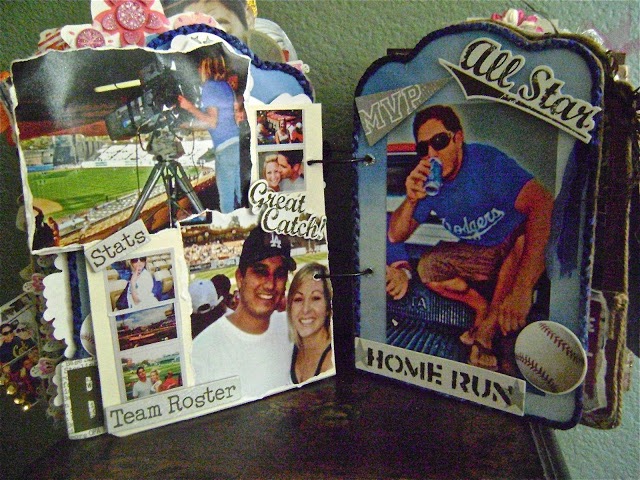 Pages from altered art book I made for daughter’s wedding gift. 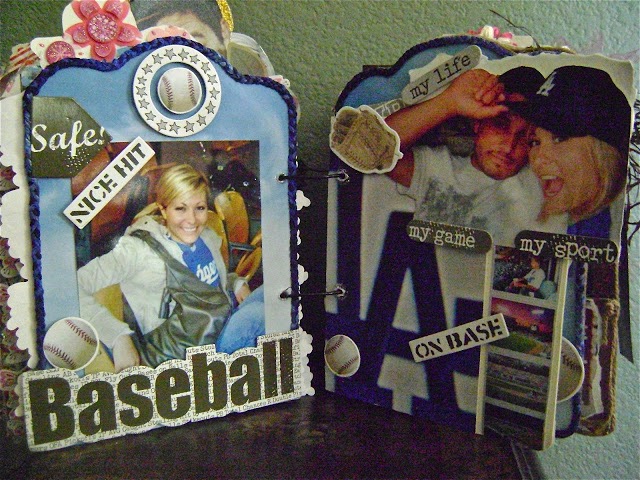 The photos below are from a Dodger game we went to on Mother’s Day a few years ago.

Wouldn’t it be awesome to go to watch the game in person? I have a feeling the thrill of this World Series is going to resonate for years to come. 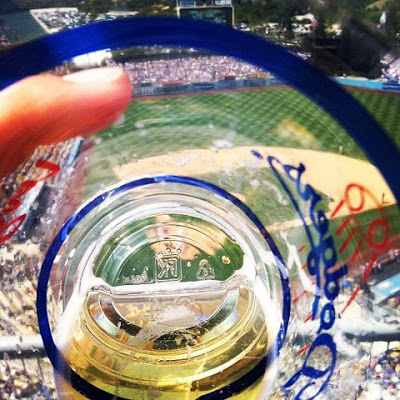 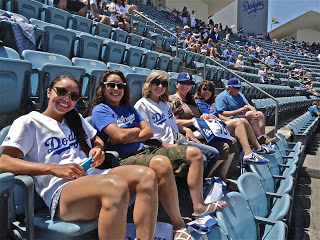 Dodger games are exciting to attend even if you’re sitting high up in a nosebleed seat! 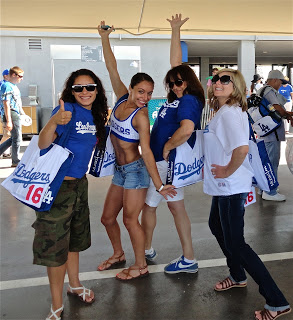 My daughter with her two sisters-in-law and her mother-in-law, Diane. 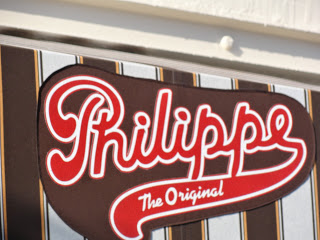 Philippe’s restaurant near Dodger Stadium is famous for their French dip sandwiches. It was established about 108 years ago. Many Dodger fans like to eat there. 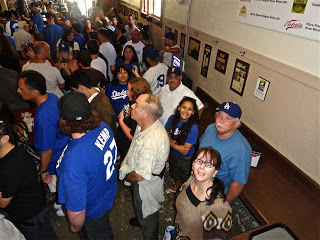 You can always expect a crowd at Philippe’s The Original after a Dodger game. 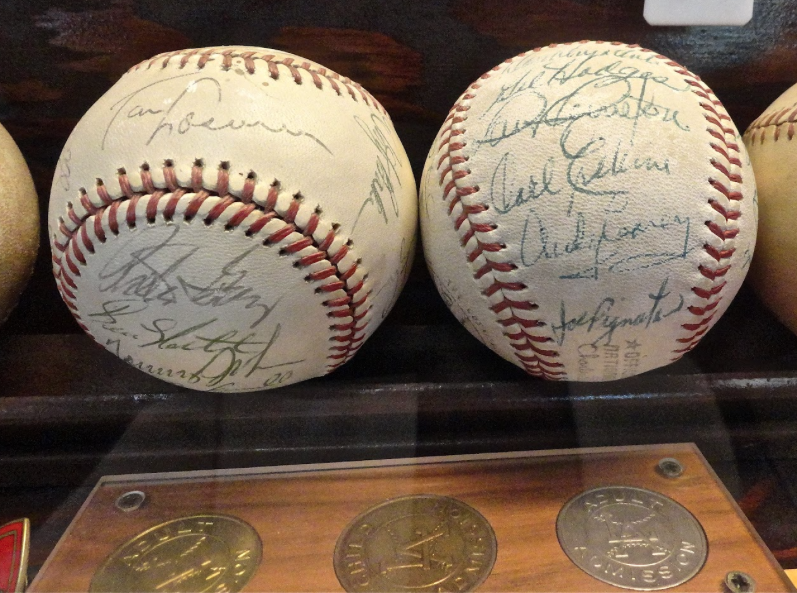 Philippe’s has a large glass case with baseballs signed by Dodgers through the years.

George pointed out one signed by Mickey Mantel. I don’t see Mickey Mantel’s signature on these baseballs, though. Do you recognize any of these signatures?

Speaking of baseballs signed by Dodgers, let me tell you a little story.

I was 16 when I got to go to my first Dodger game. A high school friend drove a carload of us. We sat in cheap seats in left field and Willie Crawford hit a foul ball our way. Some guy near us tried to catch it, but it ricocheted off his hand and landed under the empty seat next to me. 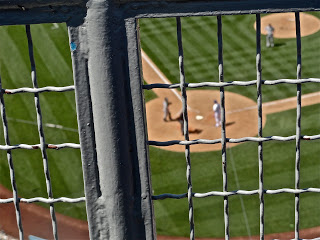 Woo hoo! How many fans can claim they got a foul ball at their first Dodger game? But it gets even better. We stayed after the game, hoping to get it autographed. Home run for me! I got it signed by Steve Garvey, Ron Cey, Steve Yeager, and Doug Rau. I guess the Dodgers don’t do regular signings after the games anymore. Die-hard fans would die to have that ball.

Oh, but this story gets even better. When I met my husband, George, who loves baseball, he was super impressed with that autographed ball. That might even be the real reason he married me! 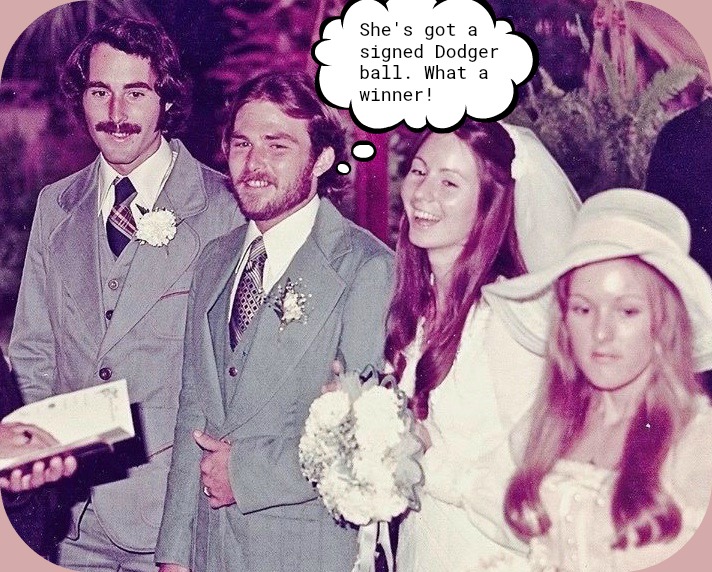 George never made it to the big leagues but was content playing on city league teams. When we had children, he had high hopes for our son, so George signed Puck up for t-ball when he turned 5. 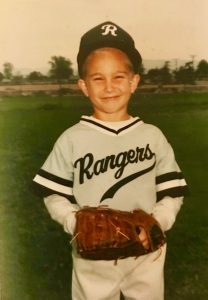 Our son Puck back in his Little League days. He has three younger sisters.

Perhaps we should have bought a special glass case for my prized souvenir baseball. One day Puck found it, took it outside, and tossed it around. You guessed it. Those autographs were obliterated. George cringed when he discovered what happened.

Of course, Puck didn’t get punished. He had no idea what was in his grasp. It was our fault for not keeping it out of his reach. Oh well, you win some and you lose some. 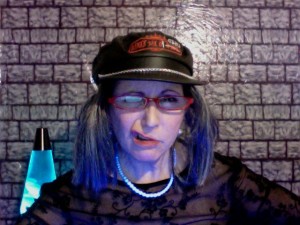 Last night’s game kept me on the edge my recliner chair. Did you watch it? I seldom watch sporting events on TV, but this year I’m hooked on the World Series. The players on both the Dodgers and the Astros are AH-MAZING! The talent of these young whippersnappers is mind boggling. All I can say is Tripple Wow! Wow! Wow! Make that a Grand slam WOW! 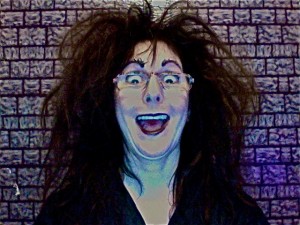 Tuesday’s game will be played at Dodger stadium, which happens to be Halloween. If you could go to the World Series game tomorrow, what costume would you wear? 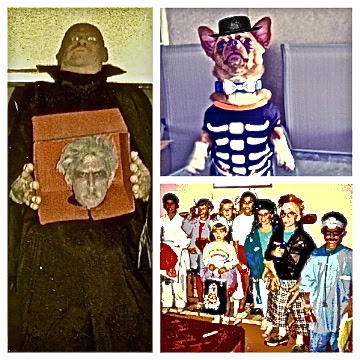 Scary costume on the left was about 7 feet tall.

If someone wears a tall, obstructive costume like the photo on the left (above), other fans might throw popcorn or peanuts at them. Wear your short costume. Flat hats only! 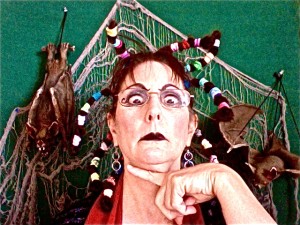 I wish I still had the hot dog costume I made years ago when the kids were little. I’d relish going to the game as a Dodger dog. (Sorry, couldn’t help myself.) I bet there are others with the same idea. How many hot dog costumes do you think will be there?

Are you a baseball fan? Football? Hockey? Cage fighting? Let me know what makes you sit on the edge of your seat and gets your heart racing, your blood pumping, and makes you scream and hoot. I love hearing from you.

Note:  I’m an Amazon Affiliate and will offer merchandise from time to time. Please know if you purchase these items from my site, I will earn a small percentage (maybe 4%) at no cost to you. If you’re not interested, no worries.

Thank you for stopping by!