How Do You Cook Up Suspense? 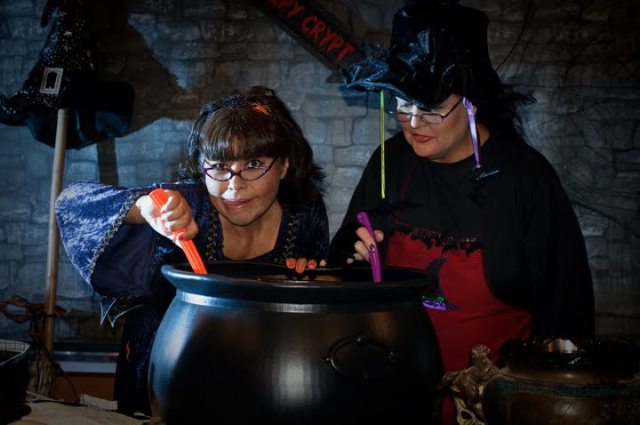 One of my Monster Moon co-authors, Maria Toth, called me at 10:30 Thursday night.  She was so excited, I thought maybe she’d just signed a six-figure contract!

Nope (not yet anyway)! She was playing around with YouTube and found a video from two years ago when she and co-author Kathy Sant starred in a Homework Hotline episode on KLCS – a PBS TV station affiliate, Los Angeles.

The script was titled, “Cooking Up Suspense.” Hostess Lorien Eck explained, “Students will learn how to apply some of the basic elements of storytelling and specifically one of the most important elements – SUSPENSE.”


The half-hour program is split up into three parts. Bookmark this post so you can find it when you need it. Kids love the silly humor and cool Halloween props we lugged onto the set, like Fangs, the vampire bat in a bird cage, and a bubbling cauldron stewing with the elements of suspense.

In case you’re wondering where yours truly was (bawk! bawk! bawk!), I was way too chicken to be on TV, so I was happy as the cue card girl. Even doing that made me nervous! At times, my hands shook as I hurried to switch to the next card.

I could have read an excerpt from our first Monster Moon book, CURSE AT ZALA MANOR (more info in the sidebar), but I was afraid I’d get stage fright, so we asked my daughter to read it, and she did a super job. We even got her husband to play the parts of Dr. Frankenstein and Dracula!

Kathy and Maria didn’t like the teleprompters (which messed up at one point), and they were depending on me. Maria told Bryan Heffron, the director, that she couldn’t memorize all her lines because, “Hey, I’m 50 years old. My mind is like an Etch-A-Sketch!” 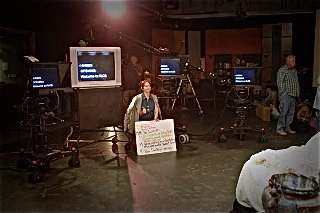 Here I am with the poster board cue cards I made!
I’m giving a thumbs up to my Zombuddies, Kathy and Maria.
I really felt the heat when the director announced there was no time for a full rehearsal, that once we began, there was no stopping, no re-taping. “You make a mistake, you live with it!”

Yikes! But Kathy and Maria kept their cool and did an amazing job. 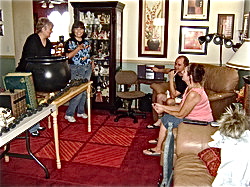 Practice run-through at home the week before

A lot of work went into writing, tweaking, and practicing the script, plus gathering all the props for the set. Looking back on the videos two years later, Maria laughed and said, “Oh, my gosh, it was such a SCREAM!” We were all loopy from pushing to get everything done on time for two 30-minute episodes. 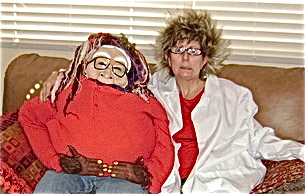 Here I am goofing off with MC (Main Character – the dummy under the blanket).

MC saved the spot for the werewolf to switch places during the last few minutes of the segment. Toward the end of the show, the werewolf sat up and made his appearance.

The werewolf was actually my husband, George. He was slowly suffocating under the blanket. At the time, we didn’t know the werewolf mask didn’t have nostril holes. (The things our loved ones get dragged into to help promote our books!) 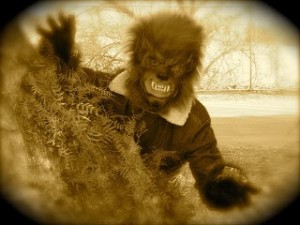 There’s another Homework Hotline episode we did titled, “Brainstorming in the Rainstorm,” but we haven’t found it on YouTube yet. If we find it, I’ll post it in case anyone wants to use it for another creative writing lesson.

So, how about you? Would you be gutsy enough to do something like this on TV, or would you rather help out behind the scenes and hold up cue cards like I did?

30 Responses to How Do You Cook Up Suspense?