Posted on April 5, 2018 by lynnkelleyauthor

Happy Birthday to my oldest daughter, April. Twenty-one years ago we celebrated her Sweet 16 birthday.

We wanted to make her 16th birthday an occasion to remember. In order to hire a DJ, we had to cut back on other costs, so I decided I could bake and decorate the cake myself. No sweat. 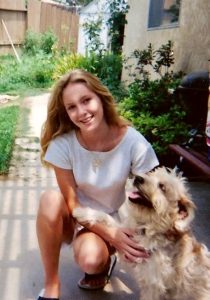 We expected over 50 guests, so I baked four yellow cake mixes, which required two roasting pans. I transferred the first layer onto a large tray, but the middle of the cake stuck to the bottom of the pan. Okay, no big deal. I scraped out the middle and fit the pieces back into place like a puzzle. There were huge fissures, but extra whipped cream took care of that, and no one would be the wiser.

The whipped cream covered all the cracks perfectly. Mm-mmm! The tricky part was getting the top layer out of the other pan in one piece. April grabbed one side as I grabbed the other. We flopped it out onto the bottom layer. Dang! The top had split down the middle. No worries, though. Lots of whipped cream would easily hide that.

Camouflaging the cracks used up all the whipped topping. I still had to cover the sides, so I sent my 17-year-old son, Mike, to the store for some frozen whipped cream in the tubs.

He returned in a jiff with two cans of whipped cream and told me he couldn’t find it in the tubs. “Besides, the cans were cheaper anyway,” he added. I wondered how he knew they were cheaper if he never found the tubs to compare them.

I sprayed a fancy ripple of cream all the way around the sides of the cake. “Beautiful!” 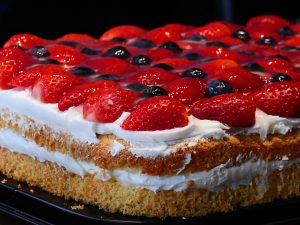 Within 30 seconds, the canned whipped cream liquefied and ran down the sides. I rushed the monstrous cake into the fridge as it was too big for the freezer. Then I wiped up the trail that had dripped across the floor.

Ten minutes later I checked on the cake, only to find whipped cream running down the shelf and into the veggie drawer. I started to remove the sticky mess, but the shelf gave way from the weight and collapsed into the drawer below. “Oh, man!” 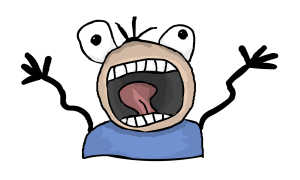 Somehow I retrieved the cake in one piece, set it aside, and cleaned up the fridge, but first I sent Mike back to the store. This time he returned with frozen whipped cream in the tubs.

After spreading the tub whipped cream on all four sides of the cake, I topped it with strawberries. Now all I had to do was write “Happy Birthday April” with a tube of decorator frosting. 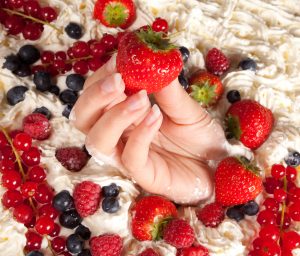 Darn it! The tube didn’t come with a tip, so I dug out the decorating kit I’d bought two years prior but had never used and squeezed the frosting from the tube into the cylinder.

I soon discovered why that kit was such a bargain. It required muscle man strength to press on it to get the frosting out. My face was red after writing “Happy.” I shook the numbness from my hands and decided to replace “Birthday” with “16th.” By the time I wrote “April,” I was thankful I hadn’t named her Elizabeth.

That night I pulled the cake out of the fridge. Voila! It was gobbled up in no time. The guests were clueless as to the comical scene that had played out just before they arrived, and that was my last attempt at a monster-sized cake. 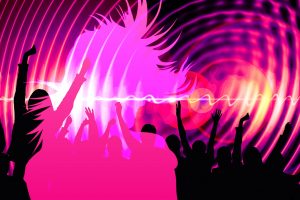 All in all, the party was amazeballs.

I apparently didn’t take any pictures at the party, so I’m bummed there’s no photo of that memorable cake. No photos of April or her siblings and friends at the party either. I did find a home video, but the quality is pathetic. That’s putting it mildly.

That’s what I get for letting kids do the recording, plus it was dark with the lights turned down so the DJ’s disco  and strobe lights could cast party-hearty vibes. Good times and great memories!

Flash forward 21 years and the circle of life continues. April is married with two children. 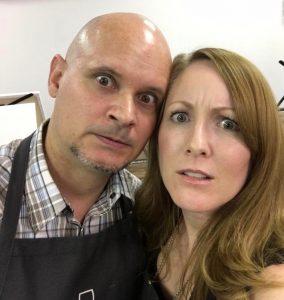 “I used to believe my father about everything, but then I had children myself & now I see how much stuff you make up just to keep yourself from going crazy.” ~ Brian Andreas

Poem for my Daughter

What are your thoughts? Have you ever decorated a cake? How’d it turn out? Do you love parties? Love to celebrate birthdays? Do you have a funny story you’d like to share? I’d love to hear your thoughts!