Movie Review of The 15:17 to Paris – True Story of Three Men Stopping Terrorist on a Train

Posted on February 15, 2018 by lynnkelleyauthor 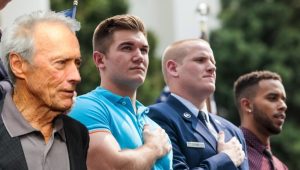 For Valentine’s Day, George and I got to see the movie The 15:17 to Paris. It’s the remarkable true story of three American friends who thwarted a terrorist on a train to Paris in August 2015.

Directed and produced by Clint Eastwood, he got flak from some critics for casting the real-life heroes to play themselves, but that’s what George and I found intriguing about the movie.

Hey, it worked out well when Audie Murphy played himself in To Hell and Back, didn’t it? Yep! Ever since I saw that movie when I was a teenager, I’ve been fascinated by the life of Audie Murphy, most highly decorated combat soldier in World War II.

Back to The 15:17 to Paris. I loved this movie. Very cool that the real heroes, childhood friends, starred in it. I enjoyed learning about their lives prior to the train scene, especially Spencer’s struggles and how so many things he’d learned in life prepared him for the day he’d take on that terrorist.

I also liked the scenes of the three friends traveling around Europe for the first time.  True to life scenes that didn’t need any special effects.

The part on the train with the terrorist was intense. Completely blew me away. It makes me appreciate the heroics of Stone, Sadler, and Skarlatos so much more. Hearing about the incident on the news, I figured three against one, they probably took him down easy. Man, was I wrong.

I don’t want to ruin the movie for you. You’ll have to see it for yourself to appreciate what these heroes did. They deserved the medals they were awarded, and Clint Eastwood deserves a medal for taking a risk and casting the real life heroes.

According to Alek Skarlatos, Clint Eastwood filmed the terrorist scene exactly as it happened, and the heroes appreciated how Eastwood stuck to the smallest details.

I was surprised to learn that many of the train passengers in the movie were the real-life passengers, and the one who was shot in the neck, Mark Moogalian, also played himself. Wow!

Eastwood was interviewed on Jimmy Kimmel Live prior to the interview with the three heroes:

Wouldn’t you think that terrorist on the train was enough violence for a lifetime? Stone had another close call after that:

An article in Los Angeles Daily News states “Less than two months after the Thalys train incident, Stone was out drinking with another group of buddies in Sacramento when they were attacked by a gang from San Francisco. James Tran is now serving a term in Folsom Prison for stabbing Stone to a life-threatening extent.”

Stone said he thought that incident was much worse than the terrorist on the train and he actually thought he was going to die.

Alek Skarlatos was a finalist in season 21 of Dancing With the Stars. If it wasn’t for DWTS, he would have been at Umpqua Community College in Oregon on October 1, 2015, where he was enrolled. A mass shooting at his college campus claimed ten lives that day.

I’m at a loss for words. May these young heroes be safe and well and enjoy life to the fullest from here on out.

They wrote a book about their friendship and the events on the train to Paris:

Here’s the description of the book: “On August 21, 2015, Ayoub El-Khazzani boarded train #9364 in Brussels, bound for Paris. There could be no doubt about his mission: he had an AK-47, a pistol, a box cutter, and enough ammunition to obliterate every passenger on board. Slipping into the bathroom in secret, he armed his weapons. Another major ISIS attack was about to begin.

“Khazzani wasn’t expecting Anthony Sadler, Alek Skarlatos, and Spencer Stone. Stone was a martial arts enthusiast and airman first class in the US Air Force, Skarlatos was a member of the Oregon National Guard, and all three were fearless. But their decision-to charge the gunman, then overpower him even as he turned first his gun, then his knife, on Stone-depended on a lifetime of loyalty, support, and faith.

“Their friendship was forged as they came of age together in California: going to church, playing paintball, teaching each other to swear, and sticking together when they got in trouble at school. Years later, that friendship would give all of them the courage to stand in the path of one of the world’s deadliest terrorist organizations.

“The 15:17 to Paris is an amazing true story of friendship and bravery, of near tragedy averted by three young men who found the heroic unity and strength inside themselves at the moment when they, and 500 other innocent travelers, needed it most.”

What are your thoughts? Have you heard about The 15:17 to Paris and these real-life heroes? Do you like this kind of movie? Did you have a nice Valentine’s Day?

I’d love to hear from you. Thank you for stopping by!

If you’d like to receive future posts, fill in your email address in the “Subscribe” window in the sidebar under the welcome video.

6 Responses to Movie Review of The 15:17 to Paris – True Story of Three Men Stopping Terrorist on a Train