Posted on November 28, 2017 by lynnkelleyauthor

Welcome to Part 2 of my series on Favorite Childhood Toys. If you missed Part 1, Rebel on a Pink Scooter, you can catch up here. 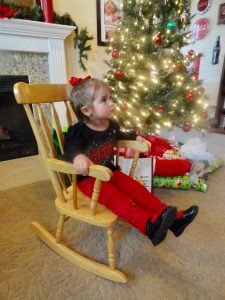 Come along on a stroll down Memory Lane. Today’s post will cover favorite childhood toys of my husband, our four grown children, their spouses, and me. Let’s see if any of our favorites trigger some of your own special memories. 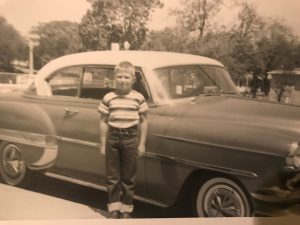 My husband George when he was a whippersnapper.

George – Born in 1952:  “Maverick Shoot and Shell twin holster six-shooter set with a Derringer belt buckle (from the TV show Maverick). The cap guns fired real spring-loaded plastic bullets, but the best part was if you pushed your stomach out, the Derringer would swing out and shoot a plastic bullet. This fooled my friends when they got the drop on me.”

Needless to say, these toys would never be sold nowadays!

I wasn’t able to find an old commercial that features the Maverick Shoot and Shell, which included the Derringer belt buckle as part of the holster, plus the cap guns, which are featured in this YouTube video:

Lynn (Lynnie back then) Born in 1956:  I practically lived in my roller skates. One time when I was about ten years old, my mom sent me to the store to buy eggs. I was in my skates. When I paid the clerk at the grocery store, he carefully opened the lid and checked all the eggs to make sure none were broken. I got them home with no cracks or anything.

I had skates similar to the pair in this video (Love the song, too):

When I was eight years old, my family moved from Pittsburgh, Pennsylvania to Whittier, California. I brought my Chatty Kathy doll on the plane with me. She was the very first talking doll, and my Granddad Demski (a magician, very finicky and particular about things) made a big fuss over how neat that talking doll was, so my Chatty Kathy doll was my prized possession.

Michael – Born in 1980: Star Wars toys, action figures, and Millennium Falcon spaceship. Uncle Jeff spent months making a papier-mâché village for Mike’s Star Wars toys. It had a two-story cave. Michael played with his Luke Skywalker action figure and the other characters in the homemade village and caves, which fit perfectly on a sturdy L-shaped coffee table made by Uncle Gordy years prior. 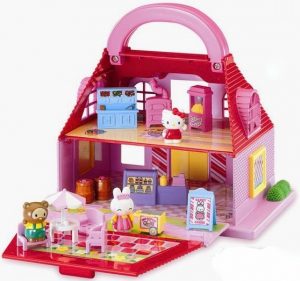 April – Born in 1981. Yesterday’s post covered all her favorites. Very amusing. You can read about it here. I found this photo of her holding up two Strawberry Shortcake toys, which she had just opened: 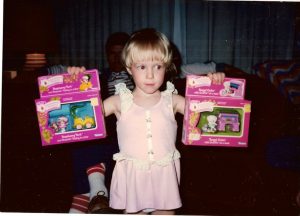 Bryan (April’s husband) Born in 1977: “My favorite childhood toy was my model train set. Countless hours were spent mindlessly watching a miniature train go around in circles over and over again at speeds disproportionate to its size. And then I would stop it and make it go in reverse. Multi-faceted! And of course that explains a lot about me . . . easily amused!”

Amy – Born in 1985:  “My favorite toy when I was a kid was my inner tube trampoline. I was about five years old, and I remember waking up Christmas morning and seeing it by the Christmas tree. I wasn’t sure who it was for, but then my mom told me it was for me, and I was so happy. I loved it and jumped on it all the time.” 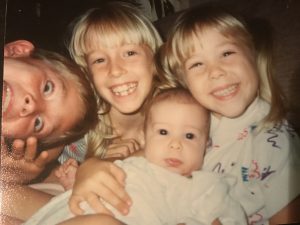 “When it popped, I had to go back to jumping on my parents’ waterbed, which ended up with a leak!”

Thomas –  (Amy’s husband) Born in 1983: “I used to love to play with my Brio wooden train sets. I made the tracks go all around my room. I also loved Legos, my bike, and my Talking Whiz Kid. Ahha! It was an electronic computer that had educational games on it. It looked like a laptop.”

I remember the Lego commercial in the video below. Do you?

Suzee – Born in 1989: “My favorite toys were Barbies and Skip-It. Barbies, I remember I always played with them with my friends. It was the coolest thing back then. And I used to play with them in the bathtub. One time my brother threw them outside in the backyard because I left them in the tub, and the dogs chewed them up. I was so mad!”

“I wanted a Skip-It for a long time and I kept asking for it for Christmas. One year I got it! Christmas morning was busy so I didn’t get a chance to play with it at home, so I took it over to Aunt Cindy’s and Uncle Jim’s house and was playing with it and it broke (hit it on a patio post). My Uncle Jim saw how upset I was and told me he would fix it for me, but he never got around to it, and I never got to play with it again. By the next year, I was over it!”

(Hello – Mom adding her two cents here. I don’t believe Uncle Jim could have fixed the Skip-It. It was pretty busted up. Sounds like a Charlie Brown Christmas, doesn’t it?)

Brett – (Suzee’s husband) Born in 1987: His skateboards were his favorite toys. He got the first one at age six or seven, a black and green Nash brand, and he was ready for an upgrade about a year later. He still rides a skateboard to this day.

Wow! Very cool skater video. Now I know where the Nash brand name comes from. See ya later, Sk8-ers. (Grammy trying to keep up with the lingo. Poser? I take exception to that. Haha!)

I hope you enjoyed hearing about some of these vintage toys. These toys and stories are jogging lots of memories in me.

Are there any you can relate to? Did you have a sibling or someone that messed with your toys? Do you love the holiday season? What are your thoughts?

If you enjoyed this post and would like to receive future posts, you can subscribe by filling in your email info in the window in the side bar.