Posted on August 20, 2011 by lynnkelleyauthor

If you’ve been following my blog, you know I’m a cyberspace-cadet. I warned you in my profile. Back when I was a court reporter, I had to hide my kooky side and present myself as a professional. 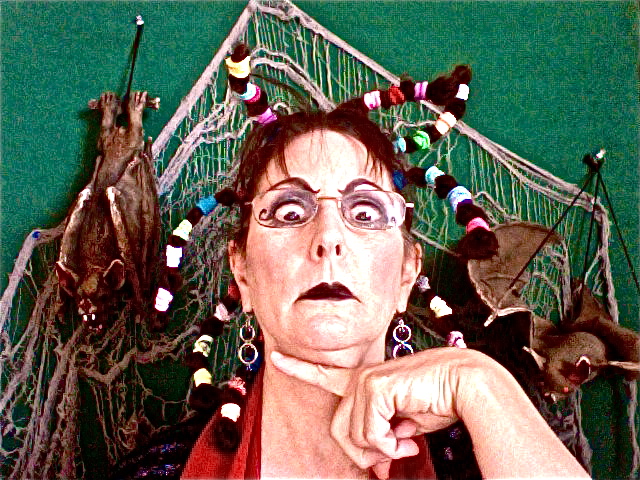 Here, in my little corner of the web, I’m taking a huge risk by exposing my quirkiness. It could all blow up and I’ll have to dig a black hole to crawl into.

I hope you’ll bear with me as I share another vlog with you. It’s out takes of the first attempt to read my short story, “Cyclops Clyde.” I named the storyteller Ma Cob, but she wasn’t spooky looking at all, just weird, and needed an overhaul.

I’ll post that one next week, and that’ll be the last vlog I do for a while because my new grandbaby (nicknamed Punkin since we don’t know the sex yet) will be arriving in a week! I’m trying to contain my excitement. Do you think it’s a boy or a girl?

Anyway, here’s the first version of Ma Cob. The stupid hairdo wore me out. By the time I started recording, I was tired, tongue tied, and kept messing up. Over and over. The whole thing would have been a waste of time, except for a few silly out takes that might put a smile on your face.

Ma Cob attempting to read “Cyclops Clyde.”
I don’t know which vlog is riskier, this one or next week’s, where Ma Cob’s makeover is so creepy, I even scare myself.
Here’s a peek: 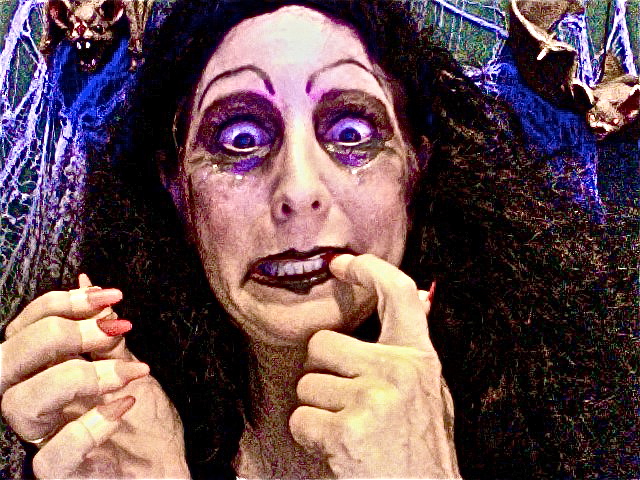 Ma Cob’s new look – Creepiest Storyteller in Cyberspace
Forget all those phooey ponytails that made my arms ache and my hand cramp. A wig takes a couple seconds to pull on. Shazam!
Mo’ makeup gave Ma a creepy-crawly effect. Oh, and check out that manicure. Fake nails at a penny apiece, what a bargain. (Can you tell I’m on an alliteration kick? It kinda goes with the story.)
How do you feel about climbing out of your comfort zone in your blog posts, your writing, or elsewhere? Do you wonder if you should be more low key? I think that’s good if it’s being true to who you are, but what if it’s not? I LOVE your comments, even if it’s just a, “Hello, weirdo!”